It has been three years since Chinese professor Xu Mingtang started teaching qigong exercises in Yekaterinburg. Nowadays when the behavior of people in our society is governed by selfish reasons far too often, it is difficult to understand what exactly brings this remarkable man to our austere region. There is no business here; earnings from teaching can hardly cover living expenses here and tickets to Beijing. Still, after a while spent back home, Xu Mingtang rushes to Russia again. 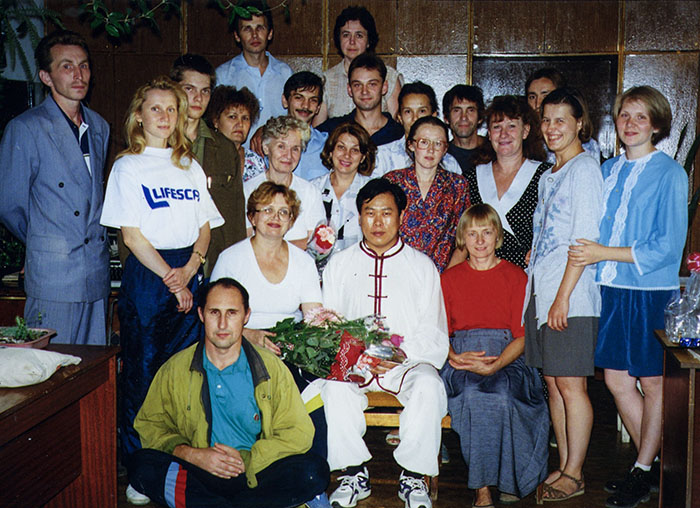 What progress have people in Yekaterinburg seen after practicing qigong exercises? Especially of interest are those showing willpower and continuing their practice. There are many of them, by the way. Numerous people have created qigong enthusiasts’ club and come to practice together.

Let me tell you about one of the most amazing cases.

When Xu Mingtang is asked if there are any age limitations to be successful in qigong, he usually answers that even an 80-years old man can get good results practicing this system. As a matter of fact, there is such a man in Yekaterinburg currently. He is 82 years old. He started practicing Chinese exercises 2 years ago. Before that he had tried many various ways to improve his health including Shatalova’s system. There was no visible result. Finally he started practicing qigong. As a result, the planned surgery on prostate was not necessary; he got rid of severe insomnia and falls asleep in 5-10 minutes, cardiac arrhythmia and cataract retreated, whereas his eye pressure, impaired as a result of glaucoma, has almost returned to normal leaving his doctor awfully surprised, as glaucoma is an incurable disease, it does not retreat... And doctor also showed active interest to the magical “recipe” that the patient used. Nowadays this 82 years old man is guiding groups to hikes sometimes stretching over very long distances.

All of this shows that the way to self-perfection is never closed, and age is not an obstacle here. There are other obstacles though, such as lack of willpower and courage, perseverance, and a wish to compete with destiny.

is a story of a retired teacher of physics. Her whole life she had worked in a school. She went through five abdominal surgeries, diabetic coma, suffered from rheumatic heart disease and was approaching a complete loss of vision. Now she has completely recovered after stroke, and her health condition has improved considerably.

There are medical doctors in the group who could not be helped with our western medicine. Practicing qigong for a longer period of time has helped them to successfully recover from their diseases.

One of the club members with Ph.D. in Biology first came to Xu Mingtang’s classes with a fair amount of skepticism, ready to expose “quackery and mysticism”. Instead, she found a sound, scientific system helping to harmonize energy in human’s body. It is exactly energy imbalances that cause diseases. Thus, harmonizing energy means acquiring “wings” to fly, and who does not dream of that?

Our possibilities are unlimited. If all people learned to control and manage their energy, we could influence our environment, we even could decrease radiation. Chinese professor demonstrated it in one of the classes. Somebody had brought a dosimeter with them, and people started measuring the emitted rate of radioactive nuclides. The highest number of nuclides was emitted by Mingtang. He had just come from Kyiv, Ukraine, where he also has many students. After sitting for about 10 minutes (it seemed he was sleeping) Mingtang asked to repeat the radiation measurement. The dosimeter showed a much lower rate of nuclides.

Recently Ural Zhong Yuan Qigong Association has been founded. It fosters the development of this system of health improvement and spirit perfection.

These days the Chinese professor is arriving to Ural. He will teach 1st level practice... 2nd and 3rd level practice is also planned. 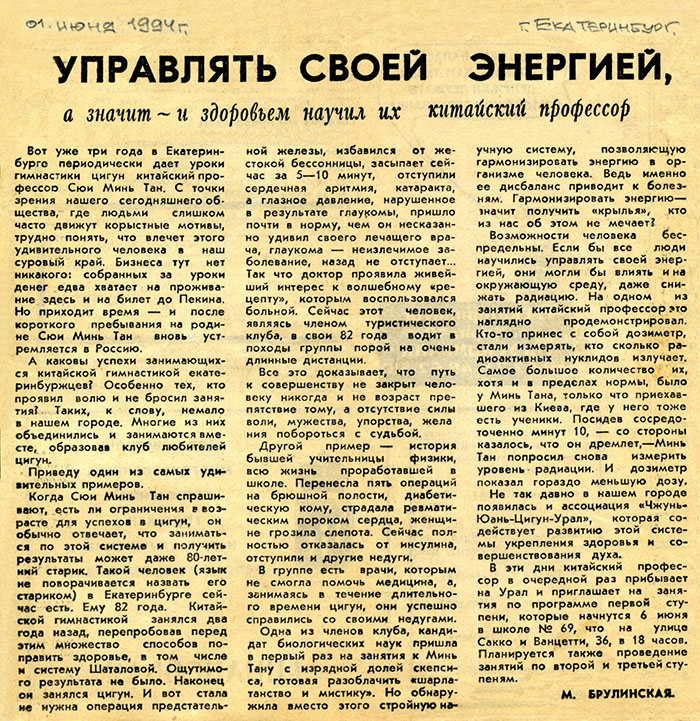