(Mrs. Xu is a participant in the individual research program at the Institute “Kundawell”)

According to the stories of Mrs. Xu's daughter, her Mom did not hear 18 years in her left ear, and this was not the only problem she had. Insomnia, menopausal syndrome and a bunch of other illnesses made a woman feel miserable in this life.

According to the initial pulse diagnosis and other methods of Chinese Image Medicine conducted by Professor Xu Mingtang, the patient had dark spots in the pituitary, ovary, and lungs.

(notes made after diagnosis by Professor Xu Mingtang)

After the diagnosis, an organism healing scheme was developed for the team of Kundawell Institute specialists who took part in this. Using the methods of Chinese Image medicine, they “aroused the work” of the brain, brought the lungs to the correct state using the “MING” and “HUA” mantras, healed the pituitary gland and ovary, removed information from darkened areas of the body, and changed the image.

After the first sessions, Mrs. Xu was able to hear some sounds. She said she heard her daughter’s voice. It was not clear, but she understood what her daughter was talking about. Moreover, on the same day she managed to watch TV for more than an hour. This was not the only result. Later, when talking with my daughter, it turned out that: “after the healing sessions, the mother's snoring decreased...” 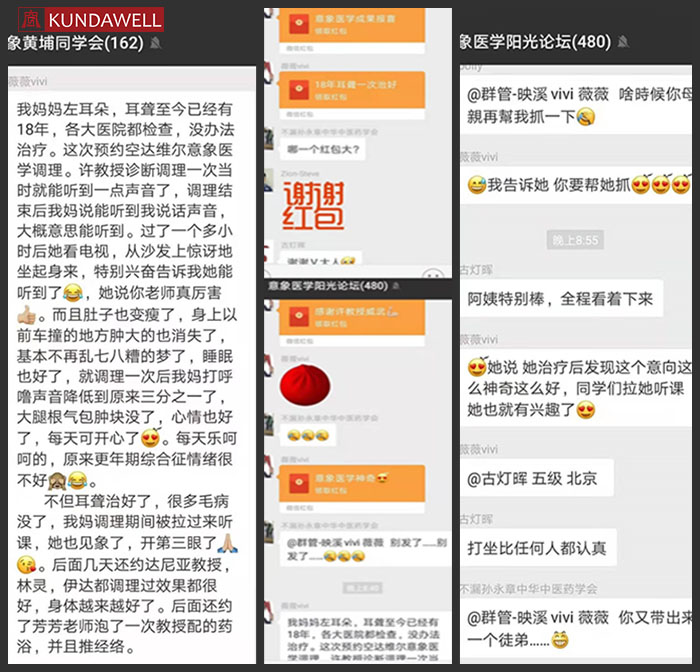 For 10 days, the Kundawell Institute experts, led by Professor Xu Mingtang, "changed the patient’s sick image to a healthy one." On the third day, the abdominal cavity decreased, swelling disappeared, a healthy sleep appeared and mood improved. As a result of treatment, not only deafness, but also many other diseases, including a swelling on the leg, disappeared. The emotional distress caused by menopause syndrome has also disappeared. As Mrs. Xu said, each image-therapist in the Kundawell team is good in its own way, everyone has their own approach to the patient and this gives different sensations experienced during the session. This makes the team strong, and healing is effective, even in such a short time.

But that's not all. At the time that Mrs. Xu was on an individual research program, the Kundawell Institute took an intensive course in Image Medicine for Chinese students, where her daughter studied. By chance, my mother had to attend classes in Chinese Image Medicine and discover the ancient forgotten methods of the school of Dr. Bien Chue, understand what the "image" and "third eye" are and learn to develop these abilities. In a conversation with our daughter, we found out that “Mom is studying image medicine now, she really wants to learn this method and help people; she practices every day and helps friends improve her health and is very grateful to Grandmaster for this."

(Grandmaster Xu Mingtang - the founder of the modern direction of Chinese Image Medicine, the successor of the traditions of Dr. Bien Chue school)

Now the patient daily shares information about Image Medicine with her friends, relatives and acquaintances. She says that "it’s better to teach a person once than to help him constantly." After all, having come to Kundawell, you can not only change the state of your body and heal the disease, but also learn in the classes of Grandmaster Xu Mingtang how to heal yourself and help others.

In the publication
content from WeChat moments were used.