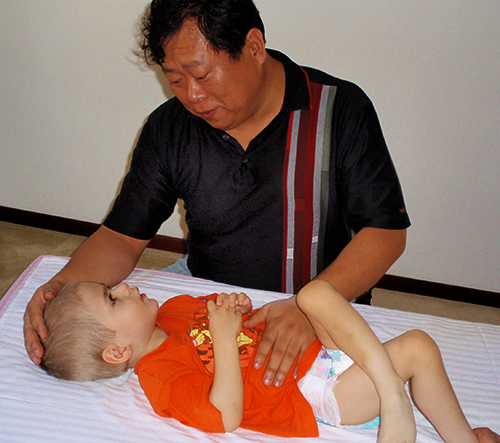 As a rule, the process of treatment the nerve system disease require long period of time. It needs multiple treatments with intervals of 3 to 9 months. After the course of treatment we can see positive changes which continues for a long time.


We interviewed Vitalik’s grandfather during their third visit to the Institute:

- What were Vitalik’s symptoms and state when he came to "Kundawell"?
- He came with severe epileptic seizures - 5-6 times a day. When Vitalik was 3 years old he lost consciousness in a fraction of a second during the attack, and he had atony. He could not sit up, walk, understand speech addressed to him.

- How developed the disease of your grandson?
- From 3 months, we have to pay attention that the child does not hold his head, does not react to speech. From 9 months appeared seizures by type atonic nodding 2-3 times a day. He began to take different anticonvulsants, which initially seemed to help - somehow managed to arrest the attacks, but then they stopped to help. When we came here, he drank two drugs - Topamax and Suxilep. Nobody knows the cause of his illness, whether the infection during pregnancy, or something else, but as a result, there was a cortical-subcortical atrophy. There was atrophy of the optic analyzer and much of the brain in the cortical-subcortical parts. As a result appeared epileptic seizure, 5-6 times a day, 2-3 times at night. Sleep was always restless.

- What happened after your arrival at "Kundawell"?
- In September 2009, we got the first time and have been here three weeks. Vitalik had sessions of Professor Xu Mingtang and Tatiana Fogel. As a result, we were able to cancel one medicine - Topamax. It is toxic, highly active, leads to disease of liver and kidney, and also kills the brain. On the one hand - does not develop epilepsy, but on the other hand - hinders the development of the brain. The second time we came six months later, in March 2010. This time three specialists of Image Medicine held sessions - Master Xu Mingtang, Valentina and Flyura. This time we have lived here for 5 weeks. It was managed to achieve the following result - we were able to remove a second medicine - Suksilep. So, when we left "Kundawell" after the second time, we did not use anything against epilepsy, and there were no more seizures. Only the small seizures - like fading. But Vitalik did not lose consciousness as during an epileptic attacks, but just fade for a second. Sometimes, after that he was angry or crying. After the second time, a month and a half later, he start to seat. He sat himself on the knee from any position, and then tried to half-rise on his knees, trying to stand up on his feet, but it was on a subconscious level, without any purpose, just stand up. Now he does it quite freely.

- Which difference between your 3-d visit at the Institute and 1-st, 2-nd?
- At this visit we have the longest stay - 6 weeks. Over this period we received meaningful results, there are many changes. In our previous visit changes occurred after passing some time, but now they have become visible during the treatment. Vitalik begin to walk much better. In the legs appeared the tonus and stability. Earlier his legs tottered, but now his step is more resolute. In the previous time he needed 95% of my help to walk, but now he do it mostly himself, I'm only support him. He doesn’t have equilibrium yet. The last days we walk three times a day for 40 minutes. One more, my grandson began to fix his look rather often. I told Master before, that I would consider that the changes and development were evident when Vitalik would respond to the words addressed to him. And just today we have a special day, I was waiting it for 3 years! In the morning I woke up, he sat with his back to me on the floor and I called him. When I wake up, I always call him: "Vitaly, Vitaly!" And then, suddenly, a few seconds passed, he turns his head, then turns it completely and looks in my eyes. This is not a fortuity. That is what I was waiting for! When he would have a reaction and understanding that I call him.

- Yes, this is great! And we are happy with you.
- I hope that it goes on. I remember how he sat for the first time ... I have a happy feeling that there will be a lot of happy moments – Vitaly will start to talk, to walk himself ...

- What would you say to people who have similar problems?
- I am very grateful to everyone who participated in the treatment of our grandson, but for today, I see nowhere any alternative treatment to "Kundawell." We study, we look on the internet, talk to people, we know that our drug treatments of the disease is very harmful, because they lead to a deterioration of the functions of internal organs ... I don’t understand exactly the specific characters of treatment methods at "Kundawell" but the result is evident, we are very happy! 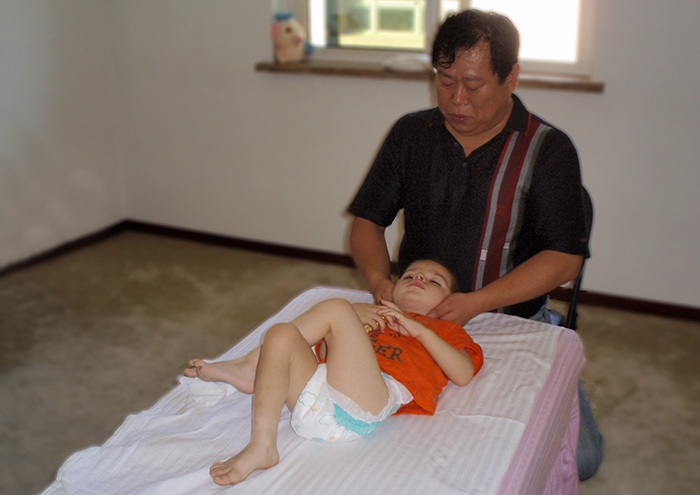 - What do you want to wish Master Xu Mingtang?
- Health! We communicate with him for a year, he is an ordinary man, but he does extraordinary things. We are very grateful to him and his team.