“He wants to become a healthy boy, who can walk”

Diagnosis: “Nobody knows what’s wrong with me. We have visited many doctors, who wanted to help me, I even don’t count now how many doctors, but I have no diagnosis. Doctors just shake their heads, because they don’t know, what is the reason of my complications and how it is possible to cure me. We have tried everything, and all, what we hear: “we don’t know how to help you…” (from FB publication)

We publish the review from Martin’s father FB page. 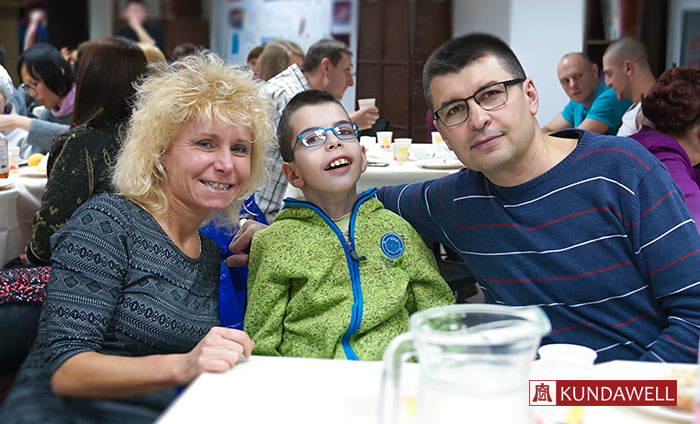 “Have a wonderful day everybody, who follows Martin’s (our son’s) story.

On Monday, January 15, 2018, we together with Martin had safely returned from China, where he was undergoing 20 days individual researching program in Kundawell Institute.

First of all, we want to thank all those kind people, who had supported us sincerely. You gave Martin not only the health improvement, but, above all, the hope, the faith and the possibility to change his way of life. Thanks to you and to image-therapists from the medical institute (Beijing Medical Research Kundawell Institute), he is on his way to recovery.

Now, I want to share the story of how it all had happened and to share the results of rehabilitation in the Institute.

On the first day Martin went through diagnostic and took Image Therapy session (Chinese Image Medicine) with professor Xu Mingtang. During diagnostic process, professor has found, that the main cause of such a state of my son’s health is the changes in the lungs, more precisely – their major weakness. For its part this process affects the other organs: kidneys and heart. Weakening the energy of these vital organs, the flow of the energy inside the channels and meridians of the body gradually regressed (the information from Traditional Chinese Medicine), and this caused gradual weakening of the musculoskeletal system and speech.

After Image Therapy session, Xu Mingtang ordered to give Martin all kinds of help during his time inside the Institute. The treatment, which professor had prescribed Martin, was based on the methods of Traditional Chinese Medicine. Chinese Image Medicine method is different from the western medicine and Traditional Chinese Medicine. This method considers the human’s body as three connected levels: physical body, energy and information. This method works very well at the information level. It is very hard to describe the “information” concept, it is possible to do from the quantum fields point of view... The method always works with the root cause of the disease, which was found during the first diagnostic. And if it is possible, the cause of the disease is excluded at the informational level. If not, then regular therapy is provided at energy and physical levels.

Our everyday schedule was full of this therapy (Chinese Image Medicine). Every morning we started from the wellness practice Zhong Yuan Qigong for getting more energy inside the body and the whole harmonization in it, practicing with the image-therapist Aleksei Stepanov. Then specialist of the institute Olga Smirnova provided 60-90 minutes Chinese Image Medicine session. Additionaly she, as a very skilled physiotherapist, has concentrated on the treatment of the locomotor system.

In the afternoon Martin was at the Chinese doctor of Traditional Chinese medicine, doctor Wang Gui Chun, who provided mokso-therapy and with the help of the wormwood cigars was taking away the blocks inside the energy channels and was making the whole energy system to work normal. After this Martin had the second Chinese Image Medicine session with Aleksei Stepanov. He was working with different parts and organs of the body, strengthening the connection between them. And in the end of the day there was an hour of meditation.

And what was I doing?

I was helping Martin in going through the individual wellness program. I was with him in the room all the time, and I was watching the changings in his body. On the third day I noticed the difference compering to his standard state. They were little, but very significant changes in the period, when the treatment was going on.

At some moment I asked him, whether he saw any changes. He nodded and said that yes, there were changes.

He got lots of energy starting from the third day of treatment, and he became more active. Every day was bringing us new possibilities. We gradually were watching as in Martin’s body reactions were getting faster, especially in hands. He started holding his head better. The deepens of his breathing and the eyes movements began to improve greatly. After a while we both had felt that his health got better. This has strengthened Martin’s faith in recovering and has made him incredibly strong. He felt the changes for better in his body. Every day together we were impatiently waiting for new sessions of therapy and we were glad with every new discovery of his body’s possibilities and health improvements.

When we returned home, we saw, that we had achieved a lot. Maybe for somebody these are little achievements, but for us and Martin they are great, very clear and important.

This is the notes from Martin’s mother after our coming back: “Martin has more energy. He goes to school with my help. It became much easier to support him, he can raise his legs better. He’s not nervous so much. Before his trip to China it took us great efforts and lots of energy just to go out somewhere. Now he can hold his head much better and opens his eyes, he looks more around himself. And about the food – he eats much better and faster, and the food is not dropping from the spoon.”

Martin himself made the changes in his schedule. In the morning, not telling us a word, he programmed his alarm-clock at 5:30 to practice Zhong Yuan Qigong, and after the alarm sound he started to practice. For him it has become usual – to practice every day. He insists, and his alarm-clock really rings at the same time every morning, because he wants it. He feels, that he needs it.

Next day after our return home, Martin asked, if we could buy him sneakers. Together we went to the shop and bought them, and he had chosen sneakers himself. It was real happiness for him. He wants to stand up on his feet wearing this pair of shoes. This is a great motivation for him. His faith is amazing and incredibly inspiring. Every day he wants to open and discover new possibilities of his body. He wants to stand up and to walk. He knows that he has a long way ahead. But he is not worry, he is doing something in what he has faith. And he is going to reach the result himself, without mother’s and father’s help! And we shall support him, because it’s worth it!

What are we waiting for?

After our return we have received the report on the results of the individual research program and recommendations from the specialists of Beijing Medical Research Kundawell Institute about the further treatment in Czech Republic. Martin has to continue practice wellness gymnastics and to take sessions of Chinese Image Medicine. For two months he has to continue to take the food supplement “Sea King”, which was developed by professor Xu Mingtang.

This Sunday we had a visitor from Praha – image-therapist Monika Kunovska, who is continuing doing what specialists of the institute started in China. She briefed us on the basis of Chinese Image Medicine, for we could better work on Martin’s health improving every day and to keep the energy in channels and organs. We gradually are creating for him a schedule, including wellness gymnastic and other methods, to support Martin’s faith in his full recovery and to help him to reach his goal: to become a healthy boy, who can walk.

As his parents we are extremally excited with his enthusiasm, which he feels thanks to all of you, and thanks to the Fund “Life for Children”. This Fund has helped us to raise the money for the treatment.

Together with Martin we wish all your dreams become true. We wish you to have the clear goal in your life and the little signs, which can show you, that you are on the right way to this goal, as it is happening right now to Martin.

If you have more concrete questions about our visit to the institute, please, write us on this e-mail: rodice@nadejepromartinka.cz

Thank you so very much.
Sincerely, the Klimeshov family.